The Sars-CoV-2 vaccine developed by the University of Oxford demonstrated average efficacy of 70.4%, according to results of clinical trials.

The interim analysis of phase 2/3 trials in the UK and Brazil found efficacy of 62% following two full doses given at least one month apart.

However, vaccine efficacy was 90% when ChAdOx1 nCoV-19, also known as AZD1222, was given to a subset of participants as a half dose, followed by a full dose at least one month later.

No hospitalisations or severe cases of the disease were reported in participants who received the vaccine, Oxford’s partner AstraZeneca said in a press release this morning.

The data also suggested a half dose and full dose regime could help to prevent transmission of the virus, according to a press release from the University of Oxford.

Sarah Gilbert, professor of vaccinology at Oxford, said: “The announcement today takes us another step closer to the time when we can use vaccines to bring an end to the devastation caused by SARS-CoV-2.”

The announcement follows promising interim data from Pfizer-BioNTech and Moderna, which recently demonstrated protection of around 95% against developing COVID-19 with their messenger RNA (mRNA) vaccines

However, the Oxford vaccine is cheaper to produce, and unlike the other vaccines that require a demanding cold chain storage, can be kept at standard refrigerator temperatures of between 2C and 8C.

Prof Andrew Pollard, director of the Oxford Vaccine Group, said: “These findings show that we have an effective vaccine that will save many lives.

Excitingly, we’ve found that one of our dosing regimens may be around 90% effective and if this dosing regime is used, more people could be vaccinated with planned vaccine supply.”

Asked why giving a half dose followed by a full dose appeared to be more effective, Prof Pollard told a briefing hosted by the Science Media Centre: “We think that by giving a smaller first dose that we’re priming the immune system differently, we’re setting it up better to respond.”

He added: “What we don’t know at this moment is whether that difference is in the quality or the quantity of the immune response, and that’s something we are doing to be digging into.”

The company said it would immediately prepare regulatory submission of the data to authorities around the world.

Trial results will be submitted to a scientific journal for peer review.

The pooled analysis included data from the COV002 Phase 2/3 trial in the UK and COV003 phase 3 trial in Brazil, and involved more than 23,000 participants.

Dr Zania Stamataki, viral immunologist at the University of Birmingham, commented: ” People will be tempted to compare efficacy between the different vaccines but we must remember that these are early data designed to achieve approval. Efficacy is not the same as effectiveness and the early numbers

Using computational methods, a team of researchers identified three compounds in traditional Chinese medicine that could be used against SARS-CoV-2: quercetin, puerarin and kaempferol​.  Of the three compounds, quercetin showed the highest binding affinity to both the ACE2 receptor and the receptor-binding domain of the SARS-CoV-2 spike protein, and could thus provide a dual synergistic effect.

The severe acute respiratory syndrome coronavirus 2 (SARS-CoV-2), the causative pathogen of the ongoing coronavirus disease 2019 (COVID-19) pandemic, infects human hosts by binding with the human angiotensin-converting enzyme 2 (ACE2) receptor on their cells, notably the epithelium lining the respiratory tract. The receptor-binding domain (RBD) of the coronavirus spike protein binds to ACE2 followed by membrane fusion to the host cell, thus allowing the virus to infiltrate the cell and commence replication.

Traditional Chinese medicine, widely used for many diseases, showed therapeutic effects during the 2003 SARS-CoV epidemic. The RBD of the SARS-CoV-2 has significant structural homology with SARS-CoV. Although the use of Chinese herbs with modern medicine has shown benefits in COVID-19 patients, several components are present in the herbs and have complex interactions, making it challenging to uncover the molecular mechanisms responsible for its therapeutic effects. 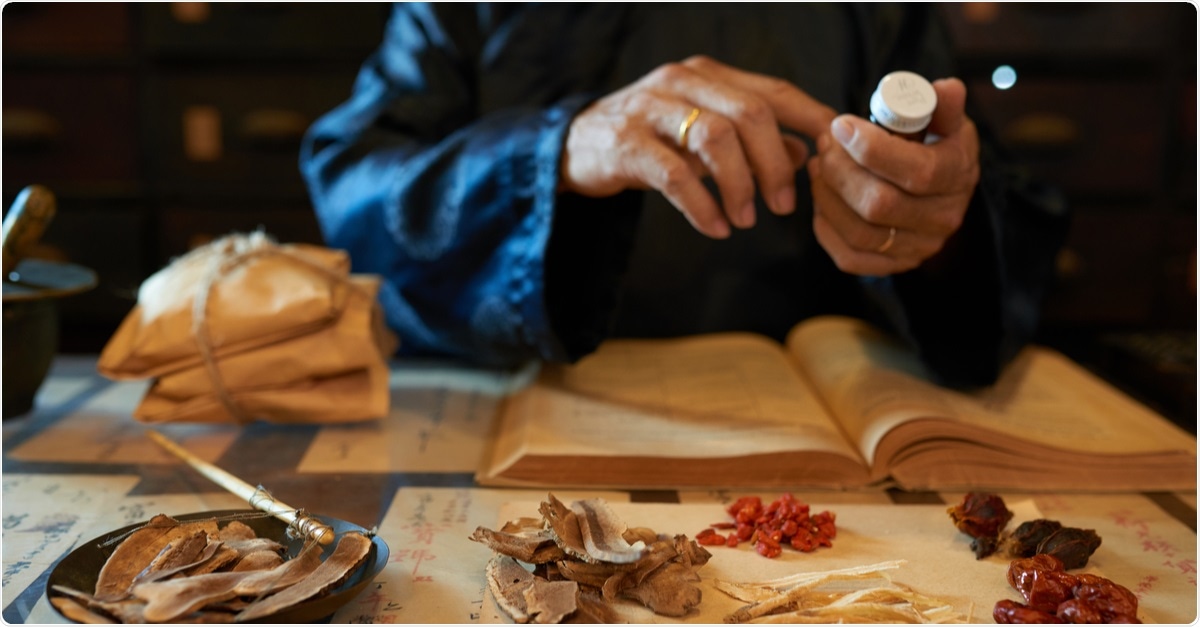 They identified the compound puerarin that could target ACE2. Then, they screened for Chinese herbs that have this compound in the database and found five. Furthermore, since it is thought that compounds in the same herbal medicine have synergistic properties, they expanded their search to include all the compounds in the five herbs to arrive at 41 compounds.

Next, the authors performed molecular docking analysis to determine potential binding sites and binding affinity to ACE2. All the three compounds could bind on the same region of ACE2, which is located some distance from the binding position of SARS-CoV-2. It is likely the compounds are causing changes in conformations rather than competing with the spike protein to bind to ACE2. Quercetin had the highest binding affinity, forming both strong and weak hydrogen bonds.