Five faculty members from The University of Pennsylvania have been elected to the National Academy of Medicine (NAM) — one of the nation’s highest honors in the fields of health and medicine.

Dr. William Beltran of the school of veterinary medicine; Dr. Matthew McHugh of the school of nursing, and Drs. Ronald DeMatteo, Raina Merchant, and Hongjun Song of the Perelman School of Medicine are among the 100 new members, who have made major contributions to the advancement of the medical sciences, health care, and public health. 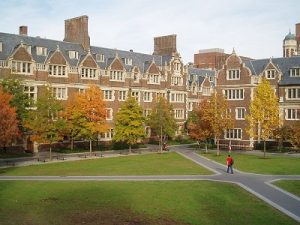 Five faculty members from Penn have been elected to the National Academy of Medicine (NAM), one of the nation’s highest honors in the fields of health and medicine. William Beltran of the School of Veterinary Medicine, Matthew McHugh of the School of Nursing, and Ronald DeMatteo, Raina Merchant, and Hongjun Song of the Perelman School of Medicine are among the 100 new members, elected by current NAM members.

Election recognizes individuals who have made major contributions to the advancement of the medical sciences, health care, and public health.

William Beltran is professor of ophthalmology in the Department of Clinical Sciences and Advanced Medicine and director of the Division of Experimental Retinal Therapies at Penn Vet. His research focuses on inherited retinal degeneration, a major cause of blindness in dogs and humans worldwide. Specifically, he has investigated the signaling pathways affected by X-linked retinitis pigmentosa and autosomal dominant retinitis pigmentosa, two of the most common forms of inherited retinal degeneration in humans. Working in canines, who suffer from forms of retinal degeneration that closely mimic the human diseases, he has helped develop effective gene therapies with promising results for treating both early- and late-stage disease.

Ronald Paul DeMatteo is the John Rhea Barton Professor and chair in the Perelman School of Medicine’s Department of Surgery. DeMatteo served as principal investigator on three national trials for the adjuvant drug imatinib for gastrointestinal stromal tumor, the most common human sarcoma. His work led to imatinib’s approval for adjuvant use by the FDA and established the standard-of-care for GIST, combining surgery and imatinib. DeMatteo is also being recognized for his work to define the immune response to GIST and its modulation by targeted therapy.

Matthew McHugh is the Independence Chair for Nursing Education and professor of nursing at Penn Nursing, associate director of the Center for Health Outcomes and Policy Research (CHOPR), and senior fellow of the Leonard Davis Institute of Health Economics. As principal investigator on multiple large-scale studies funded by the National Institutes of Health, Agency for Healthcare Research and Quality, and Robert Wood Johnson Foundation, McHugh’s work has advanced the field of nursing outcomes and policy research by showing the value of investing in nursing to achieve a higher functioning health care system. In addition to findings from direct evaluations of nurse staffing ratio laws, research from McHugh and colleagues from the CHOPR at Penn Nursing has informed legislation proposed in multiple states and countries on safe nurse-staffing levels.

Raina Merchant is associate vice president and director of the Center for Digital Health in Penn Medicine and associate professor of emergency medicine in the Perelman School of Medicine. Merchant’s work has sought to gain insights through digital media about important health trends, and she is recognized for developing, deploying, evaluating, and refining novel tools and techniques to promote individual and population health. Some of her projects in this arena include tracking both physical and mental health symptoms via Twitter during the COVID-19 pandemic, determining keywords and phrases that could be used