Dinner table chats with her scientist-parents and hospital ward rounds with her Puncha, these were what inspired her, says Dr. Maheshi N. Ramasamy, Principal Investigator for the Oxford COVID-19 Vaccine Trial, in this interview with Kumudini Hettiarachchi

Totally relaxed, she comes on Zoom on Wednesday – at the appointed hour of 12 Greenwich Meantime Time (GMT) in Oxford, England, and 5.30 p.m. in Sri Lanka.

No one would imagine that pretty Dr. Maheshi N. Ramasamy, who is quick to smile and chats leisurely, has been having a “crazy” time since the COVID-19 pandemic hit the world.

Dr. Ramasamy delivering a lecture on vaccines at the International Medical Conference of the Sri Lanka Medical Association (SLMA) last year in Colombo

For, 43-year-old Dr. Ramasamy is the Principal Investigator for the Oxford COVID-19 Vaccine Trial. Dubbing these  “exciting” times, she promptly reiterates that the very promising potential vaccine in the Oxford University/AstraZeneca pipeline is “very much a product of teamwork”. The Oxford vaccine will be manufactured by the British pharmaceutical company, AstraZeneca which has made a commitment to making the vaccine on a non-profit basis throughout the pandemic so that it could be distributed globally.

As the Oxford Vaccine Group hopes to put out another strong research paper on their vaccine trials in a week, the Sunday Times looks at the life of this eminent Sri Lankan who loves to come back to her motherland to spend time with family, mainly her four “lovely” cousins who are like her siblings and her ‘Puncha’ (mother’s sister) who is well-known Consultant Physician Dr. Anula Wijesundere.

Out of the ordinary has been only-child Maheshi’s childhood, as her scientist-parents Prof. Ranjan Ramasamy and Prof. Manthri Samaranayake Ramasamy crisscrossed the globe. Born in Colombo, her early years had been spent in Saudi Arabia and Kenya, then back in Sri Lanka and onto California, United States of America, when the country was gripped by communal violence in 1983, then to Brisbane in Australia and finally back to Colombo in 1989.

Dr. Ramasamy says that her mother and aunt were both proud stalwarts and Head Girls of Visakha Vidyalaya, but she was there only briefly, just 10 months, as soon as she began her formal school education. When she returned from Brisbane, she joined Stafford International School – as her “Sinhala was not good enough” to attend Visakha – and did both her OLs and ALs from there. She was awarded the Felix R. de Zoysa Memorial Academic Scholarship and was also the Head Prefect at Stafford International.

“I had a great time at Stafford, with its wonderful teachers and amazing Principal Noreen Welikala,” she says, while her family in Colombo was also very close. She and her cousins would be dropped off at school by her aunt in the mornings and they would all go to their grandparents’ home for lunch after school. Family dinners were also a regular occurrence, usually ending on a high note with a sing-song around the piano.

She was too young to get into medical school straight after ALs as she was only 16 years old and so took a gap year. She was “fortunate” to receive a Cambridge Commonwealth Trust Scholarship in 1995 to enter the University of Cambridge, England, as she had a yearning to pass through its portals, as both her parents had done before her.

Dr. Ramasamy’s achievements are impressive – she completed her undergraduate medical studies (MA in Medical Sciences followed by MBBChir) at Christ’s College, University of Cambridge, then trained as a junior doctor in Cambridge, London and Oxford. Choosing to specialise in infectious diseases, she completed a Ph.D investigating meningitis vaccines at Wadham College, University of Oxford.

Alongside her role as a Senior Clinical Researcher of the Oxford Vaccine Group, she is a Consultant Physician at the Oxford University Hospitals NHS Foundation Trust. She also plays an active role in teaching medical students at the University of Oxford and is the Deputy Director of the Graduate Entry Medical School and Florey Lecturer at Magdalen College.

Long discussions on scientific topics at the dinner table with her parents were the motivational factors for her passionate interest in infectious diseases, antibiotics and vaccines, while the spark to become a doctor was ignited as she tagged along with Puncha on her ward rounds, as a teenager.

“Science and medicine were part of my life,” she says, reminiscing how she drew inspiration from her parents’ discussions about infectious diseases like malaria and dengue, a hot topic in Sri Lanka in the 1990s, even though now it is mostly non-communicable diseases (NCDs) that are afflicting people. Yes, Maheshi was the only student in her Year 8 class who could draw the whole lifecycle of the malaria parasite.

Maheshi did briefly toy with the idea of taking up law but the ward rounds effectively squashed that thought. She sees practising medicine as a privilege and loves the stimulation of solving intricate cases, following a trail like a detective, talking to the patient (the human interest part), gathering all the clues, zeroing-in on the diagnosis and finally curing the illness.

Not only in her studies did Maheshi follow her parents, but like them who found each other while studying at Cambridge, she too married a fellow medical student from Cambridge, who is now a Consultant Oncologist. They live in Oxford and have three children aged 15, 13 and 10 years.

When asked how she manages her strenuous work and personal life, she says: “Not very well sometimes,” with a sigh, but explains that the key is that she and her husband are very much a team on the home-front. “We split all the work between us, cooking, looking after the kids and chores,” which, of course, does not leave much free time for hobbies. 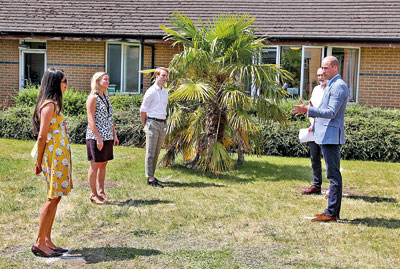 Meeting Prince William when he visited the Oxford Vaccine Group

But Maheshi does love cooking for friends and family, for that relaxes her and gives her “peace and me-time”……..she locks everyone out of the kitchen and dabbles with lots of ingredients, not only making buth-curry but also baking complicated cakes. She is also an avid reader and no matter how busy things are, she never misses her monthly book club with her friends in Oxford.

In her extraordinary work life, she is heavily into research as well as her clinical work (50-50) and she recalls how when COVID-19 gripped the world, England in general and Oxford in particular, she felt “disempowered as a clinician”, as so little was understood about the disease and she had nothing to offer the really ill patients.

The first COVID-19 cases hit Oxford in March and she was on ward-duty as increasing numbers of sick people were brought in. “It was a new infection and we did not know how to deal with it. The staff were terrified, the patients were terrified. Usually, if you didn’t know something when treating a patient, you could look it up or ask a colleague for advice. This was really scary…….we just didn’t know how to treat them and they were so sick. They came in huge numbers and very quickly their condition worsened and they died.”

The emotion is palpable, when Dr. Ramasamy says: “We were used to the occasional deaths in our patients. It was always really sad, but at least they were ‘good’ deaths. If there was no treatment, we could offer good palliative care. We could have proper conversations with the relatives, we could sit and hold our patients’ hands and talk to them and comfort them. This was different. We all had to wear masks and goggles as part of the Personal Protective Equipment (PPE), so these desperately unwell patients couldn’t see our faces, we couldn’t hold their hands and their families were not allowed to see them. Whatever we did, these patients died and it felt like they were not ‘good’ deaths.”

This is why Dr. Ramasamy’s work is so vital, finding a safe and efficacious vaccine against COVID-19 which is accessible not just to the rich and mighty but also to the poor and humble across the world, as   the Oxford University’s ‘ChAdOx1 nCoV-19 vaccine’ becomes part of the race, providing a glimpse of a better tomorrow.