She knew a midwife and other staff there well and felt confident in the idea of going to the facility to deliver her first baby, who was growing big, in the 90th percentile for his gestational age.

That’s why the Navajo woman was shocked when, at 40 weeks pregnant, she learned the hospital had shut down its obstetrics services with no prior notice.

“I was stressed the whole time as I have been seeing PIMC throughout my whole pregnancy and last minute, I had to go elsewhere,” said Chee, 30. “My baby and I felt abandoned.”

The sudden closure of the Phoenix Indian Medical Center obstetrics, or OB-GYN, services on Aug. 26 has left dozens of expectant moms like Chee scrambling to seek birthing services elsewhere — and some facing unexpected, steep costs. Some say they’ve received conflicting explanations and unclear guidance on what to do next.

The federal Indian Health Service said in an email Friday to Indian Country Today that the closure is temporary and related to “facility infrastructure, equipment and challenges with staffing.” It did not provide a reopening date.

“PIMC is working to resume obstetrical services when they can be provided in a safe environment,” the statement read.

The hospital continues to provide prenatal and gynecologist specialty care, and facilitate care for patients near term, the agency said.

“Patient safety is the highest priority for the Indian Health Service.” It did not answer questions about how it’s advising expectant mothers who rely on its birthing services.

The Phoenix Indian Medical Center, near downtown, provides health care and community health services to more than 140,000 people from the greater Phoenix area. “The tribal identity of eligible beneficiaries receiving care at PIMC is representative of 67 percent of the 573 federally recognized tribes,” its website says.

The hospital operates under the Indian Health Service umbrella, providing care to tribal citizens under a federal obligation to Native people.

It has offered prenatal and birthing services for decades.

The Phoenix Indian Medical Center went weeks without publicly announcing the closure and referred all questions to the Indian Health Service, which did not provide details on how many patients were affected.

However, a source familiar with the hospital’s inner workings said nearly 200 patients have been referred out in recent weeks. The person was not authorized to speak publicly and spoke to Indian Country Today only on condition of anonymity.

The decision to close the obstetrics services was abrupt and made by the PIMC Governing Board in response to an internal review that recommended closure due to “unsafe conditions,” the source said.

In its statement, the Indian Health Services noted aging facilities and said its Phoenix area office has started a master planning project that includes the Phoenix Indian Medical Center. It did not provide details on the project.

“Our health care facilities are 39 years old, on average,” the statement read. “Of course, that means many, such as PIMC, are even older. The industry average is 11 years. Facilities built 40 or 50 years ago weren’t designed to meet current standards.”

The source said more than a dozen doctors, nurses and midwives have been reassigned. The status of the federal money used to run the birthing center is unclear.

The Indian Health Service noted it has made “major strides” in the past several years, winning substantial funding increases from Congress.

“Over this time period, we have successfully achieved increases necessary for bolstering health services and addressing some of the biggest challenges facing our American Indian and Alaska Native communities,” the statement said.

Colleen McKelton, 39, created a Facebook group called “We Care Coalition to Restore PIMC OB Services” for expectant moms like her who are affected by the closure. It has about 50 members.

She went to the Phoenix Indian Medical Center for prenatal care until Sept. 10, when a nurse told her that her birthing plan had changed. McKelton said she was told the obstetrics services were closed for renovations.

“It was kind of like a bomb that was dropped on me during my appointment, which I thought was just a regular appointment,” said McKelton, who has used PIMC as her primary medical provider since 2016.

McKelton said she’s considered a high-risk pregnancy, and “then all of a sudden I have to go somewhere else and start over.”

Besides finding a new birthing plan, she had to figure out how she was going to pay birthing-related fees. The Phoenix Indian Medical Center told her that future hospital bills would be on her dollar.

The average cost of a vaginal birth with no complications before health insurance in Arizona is $19,093, according to data collected by CBS news.

AHCCCS, Arizona’s Medicaid agency, offers health insurance for pregnant women who meet income and basic eligibility requirements like residency. For example, a one-person household with a gross monthly income of $1,659 qualifies. Each additional person in the house increases monthly income limits by $583, according to the AHCCCS website. For those who qualify, there are no monthly premiums.

Another insurance option is the Affordable Care Act’s Health Insurance Marketplace. Citizens of federally recognized tribes have a special enrollment status and can enroll year-round.

McKelton doesn’t have insurance and applied to AHCCCS but was denied because of her income.

McKelton said the hospital recommended she try St. Joseph’s Hospital and Medical Center, roughly 3 miles southwest of PIMC, saying it might be cheaper than other options. Since September, McKelton has gone three times for prenatal checkups and already has a $1,200 bill, she said.

McKelton said she believed that because the Phoenix Indian Medical Center referred her to St. Joseph’s, PIMC or the Indian Health Service would pick up the bill, which is not the case.

“I don’t know how much it’s going to cost,” she said. “It’s like an unknown financial burden I will be facing, then I’ve been trying to be positive because I don’t want to put my unborn child at risk because it caused a lot of stress.”

Briana Almond, Navajo, started going to the Phoenix Indian Medical Center at 18 weeks for prenatal care. Her due date is Nov. 24, and she’s not sure yet where she’ll give birth.

Almond, 25, also learned on Sept. 10 that the hospital had stopped its obstetricians services, but says she was told it was closed because of poor management.

Earlier this month, Almond was denied AHCCCS because of income requirements. After, “they suggested I get on my husband’s insurance, but we missed open enrollment,” she said.

Almond said the Phoenix Indian Medical Center referred her to MomDoc, an obstetrician practice with more than a dozen Phoenix-area locations. MomDoc doesn’t deny access to services due to inability to pay and offers a discounted or sliding fee payment schedule, according to its website. Affordable services for expectant Native mothers in Phoenix also are offered at the nonprofit Native Health, which works with an outside health service to provide prenatal, labor and delivery care.

Another option recommended by PIMC,  Almond said, was to travel north to the Navajo Nation from her Buckeye, Arizona home to give birth at Tuba City Regional Health Care, another Indian Health Service facility more than 200 miles away. But Almond said her relatives on the reservation have been exposed to COVID-19.

“I don’t feel comfortable going up there to stay who knows how many weeks, leaving my family back here, just to deliver up there. And then possibly coming back and bringing home COVID,” Almond said.

“It’s ridiculous how they can leave us all stranded because of their screw-up,” Almond said. “We, as in the other women in my situation, have our plans, and we rely on them. Once you have your birth plan set in stone, you’re a little more at ease when it comes to delivering. And just out of nowhere they say, ‘We are not accepting,’ and they want you to plan to go somewhere else, and a baby can come any moment.”

On Sept. 3, less than a week after learning of the closure, Chee delivered a healthy baby boy via cesarean section at a Scottsdale hospital, 8 miles east of the Phoenix Indian Medical Center. She named her son Theodore. 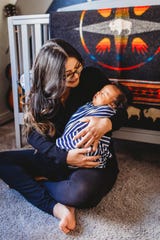 “I prayed for a safe delivery at a new care facility where I didn’t know anyone like I did at PIMC,” said Chee, who lives just north of Phoenix in Anthem.

She said staff at the Phoenix Indian Medical Center had also recommended that she travel back to Navajo for obstetricians services.

“I couldn’t imagine being 40 weeks and having to drive back to my rez,” Chee said. “That’s a five-hour drive.”

Chee said she has received about $18,000 in hospital bills and expects more to come.

She also applied for AHCCCS and was denied before and after giving birth. She said PIMC initially told her that her hospital bills would be taken care of but later said that she was responsible.

“The bill is outrageous as I don’t have over $20,000 to pay,” Chee said. “I should be recovering and not having to worry about this.”

Published on azcentral.com with permission of Indian Country Today.