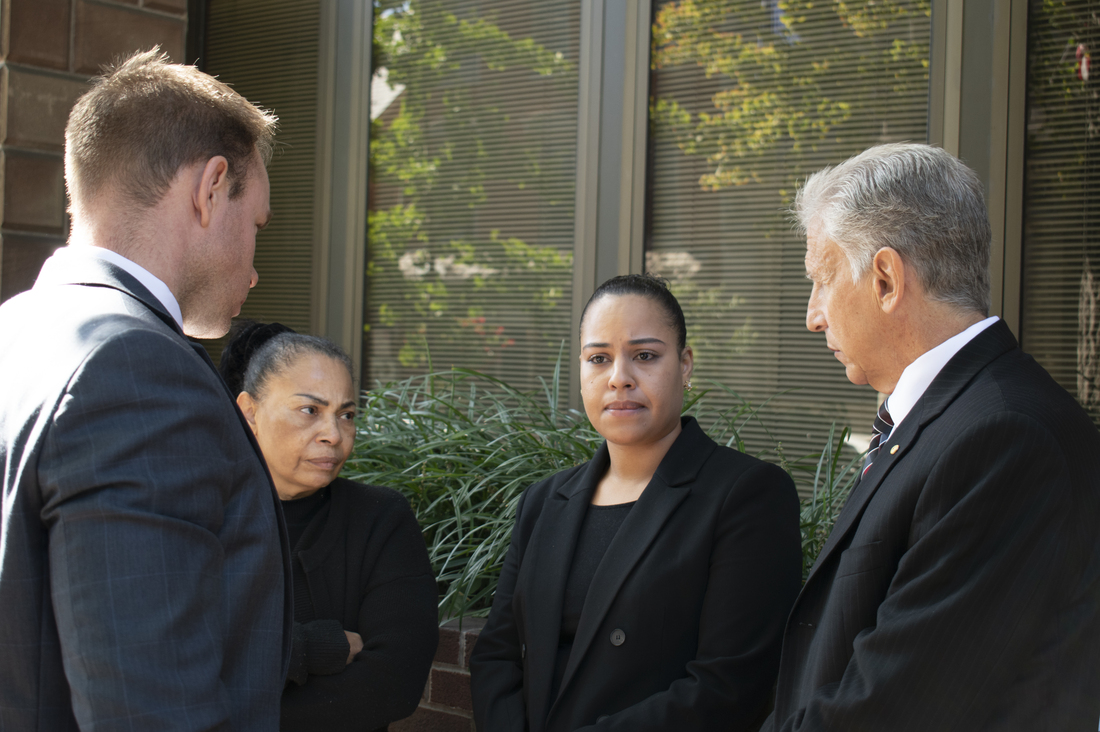 Rulennis Munoz (center right) outside Lancaster Courthouse Oct. 14, after learning that the police officer who fatally shot her brother had been cleared of criminal wrongdoing by the Lancaster County District Attorney. Her mother, Miguelina Peña, and her attorney Michael Perna (far right) stood by.

Rulennis Muñoz remembers the phone ringing on Sept. 13. Her mother was calling from the car, frustrated. Rulennis could also hear her brother Ricardo shouting in the background. Her mom told her that Ricardo, who was 27, wouldn’t take his medication. He had been diagnosed with paranoid schizophrenia five years earlier.

Ricardo lived with his mother in Lancaster, Pa., but earlier that day he had been over at Rulennis’ house across town. Rulennis remembers that her brother had been having what she calls “an episode” that morning. Ricardo had become agitated because his phone charger was missing. When she found it for him, he insisted it wasn’t the same one.

Rulennis knew that her brother was in crisis and that he needed psychiatric care. But she also knew from experience that there were few emergency resources available for Ricardo unless a judge deemed him a threat to himself or others.

After talking with her mom, Rulennis called a county crisis intervention line to see if Ricardo could be committed for inpatient care. It was Sunday afternoon. The crisis worker told her to call the police to see if the officers could petition a judge to force Ricardo to go to the hospital for psychiatric treatment, in what’s called an involuntary commitment. Reluctant to call 911, and wanting more information, Rulennis dialed the non-emergency police number.

Meanwhile, her mother, Miguelina Peña, was back in her own neighborhood. Her other daughter, Deborah, lived only a few doors down. Peña started telling Deborah what was going on. Ricardo was becoming aggressive; he had punched the inside of the car. Back on their block, he was still yelling and upset, and couldn’t be calmed. Deborah called 911 to get help for Ricardo. She didn’t know that her sister was trying the non-emergency line.

A recording and transcript of the 911 call show that the dispatcher gave Deborah three options: police, fire or ambulance. Deborah wasn’t sure, so she said “police.” Then she went on to explain that Ricardo was being aggressive, had a mental illness and needed to go to the hospital.

Meanwhile, Ricardo had moved on, walking up the street to where he and his mother lived. When the dispatcher questioned Deborah further, she also mentioned that Ricardo was trying “to break into” his mom’s house. She didn’t mention that Ricardo also lived in that house. She did mention that her mother “was afraid” to go back home with him.

The Muñoz family has since emphasized that Ricardo was never a threat to them. However, by the time police got the message, they believed they were responding to a “domestic disturbance.”

“Within minutes of … that phone call, he was dead,” Rulennis says.

Ricardo’s mom, Miguelina Peña, recalls what she saw that day. A Lancaster police officer walked toward the house. Ricardo saw the officer approach through the living room window, and he ran upstairs to his bedroom. When he came back down, he had a hunting knife in his hand.

In video from a police body camera, an unidentified officer walks toward the Muñoz residence. Ricardo steps outside, and shouts “Get the f—k back.” Ricardo comes down the stairs of the stoop and runs toward the officer. The officer starts running down the sidewalk, but after a few steps, he turns back toward Ricardo, gun in hand, and shoots him several times. Within minutes, Ricardo is dead.

After Ricardo crumples to the sidewalk, his mother’s screams can be heard, off camera. Police made the body camera video public a few hours after Ricardo’s death, in an effort to dispel rumors about Ricardo’s death and quell rioting in the city. The county district attorney has since deemed the shooting justified, and the officer’s name was never made public.

It was a tragedy for the Muñoz family — but it’s not that unusual. According to a Washington Post tracker, police killed about a thousand people in the U.S. in the past 12 months. Like Ricardo, a quarter of those people had a diagnosis of a serious mental illness.

Across the U.S., people with mental illnesses are 16 times more likely than the overall population to be killed by police, according to one study from the mental health nonprofit Treatment Advocacy Center.

Ricardo’s mother, Miguelina Peña, says she tried for years to get help for her son.

Among the problems, the family couldn’t find a psychiatrist who was taking new patients, Peña says. Additionally, Peña speaks little English, and that made it difficult to help Ricardo enroll in health insurance, or for her to understand what treatments he was receiving. Ricardo got his prescriptions through a local nonprofit clinic for Latino men, Nuestra Clinica.

Instead of consistent medical care and a trusted therapeutic relationship, Ricardo got treatment that was sporadic and fueled by crisis: He often ended up in the hospital for a few days, then would be discharged back home with little or no follow-up. This happened more times than his mother and sisters can recall.

“There was an occasion where a judge was involved, and the judge determined that he should be released home,” Peña says. “And my question is why would the judge allow him to go home if he wasn’t doing well?”

Laws in Pennsylvania and many other states make it difficult for a family to get psychiatric care for someone who doesn’t want it; it can only be imposed on the person if he or she poses an immediate threat, says Angela Kimball, advocacy and public policy director at National Alliance on Mental illness. By that point, it’s often law enforcement, rather than mental health professionals, who are called in to help.

“Law enforcement comes in and exerts a threatening posture,” Kimball says. “For most people, that causes them to be subdued. But if you’re experiencing a mental illness, that only escalates the situation.”

People who have a family member with mental illness should learn what local resources are available and plan for a crisis, Kimball advises. But she acknowledges that many of the services she frequently recommends, such as crisis hotlines or special response teams for mental health, aren’t available in most parts of the country.

If 911 is the only option, calling it can be a difficult decision, Kimball says.

“Dialing 911 will accelerate a response by emergency personnel, most often police,” she says. “This option should be used for extreme crisis situations that require immediate intervention. These first responders may or may not be appropriately trained and experienced in de-escalating psychiatric emergencies.”

The National Alliance on Mental Illness continues to advocate for more resources for families dealing with a mental health crisis. The group says more cities should create crisis response teams that can respond at all hours, without involving armed police officers in most situations.

There has been progress on the federal level, as well. Kimball was happy when President Trump signed a bipartisan Congressional bill, on Oct. 17, to implement a three-digit national suicide prevention hotline. The number — 988 — will eventually summon help when dialed anywhere in the country. But it could take a few years before the system is up and running.

Rulennis Muñoz says the family never got to see how Ricardo would have responded to someone other than a police officer.

This story comes from NPR’s reporting partnership with WITF and Kaiser Health News.