R-0 may be the most important scientific term you’ve never heard of when it comes to stopping the coronavirus pandemic.

About an hour after the Indiana State Department of Health announced yet another record high of new coronavirus cases Thursday, the Centers for Disease Control and Prevention said the Midwest numbers suggest the region is going in the wrong direction.

In a press call discussing the situation in six states, including Indiana, Dr. Henry Walke, incident manager for the CDC’s COVID-19 response team, said his colleagues were working with local and state health officials to mitigate spread of the virus.

The CDC region that includes Indiana, Illinois, Ohio, Wisconsin, Michigan and Minnesota has seen a 27% increase in cases and 37% increase in deaths in the past seven days, Walke said.

The statistics suggest “we may be going backwards in our efforts” to contain the virus, Walke said. He echoed the message that state health officials have sent repeatedly to wear a mask, social distance, and wash your hands often.

Over recent weeks, Indiana’s numbers indeed have gone in the wrong direction. Indiana on Thursday reported 2,880 additional cases, bringing its seven-day moving average of cases above 2,000 for the first time. The seven-day average for deaths has been in the low 20s, a level last reached at the end of May.

The state has increased testing by about 4,000 daily tests over the past month to about 25,000 a day, but a greater share are coming back positive. As of last Thursday, the moving average for the positivity rate for all tests was 6.9%. A month earlier it was 4%. 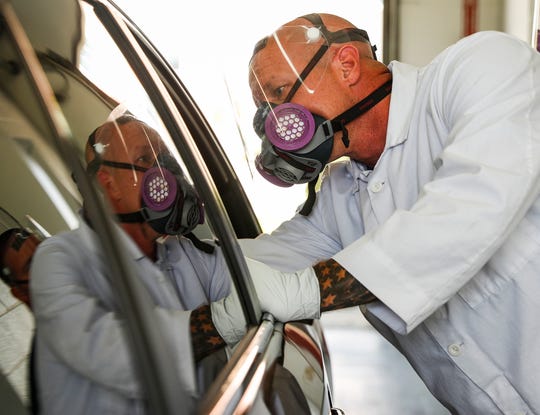 Fishers firefighter Paul Ashbt conducts a coronavirus test at the City Services Building over the summer. Indiana is seeing both its deaths and positive cases increase. (Photo: Grace Hollars/IndyStar)

Hospitalizations also have risen to a level not seen since early May, when the state was still in the most restricted phase of its Back on Track plan. On Thursday Indiana reported 1,515 people hospitalized across the state for COVID-19.

Gov. Eric Holcomb, who moved the state into the final phase of its reopening plan last month, has resisted calls from his Democratic opponent and others to restore some of the measures of the previous months that aimed to stem viral spread.

“Where we need to make improvements is on the front of what we can control,” he said. Holcomb said Wednesday during his weekly coronavirus news briefing. “We’re not living in a police state. … The last thing we need to do and the last thing I want to do or need to do is go back to a stay at home.”

Instead, Holcomb has said that the state’s homeland security department is helping local officials in hard-hit areas with education and supportas well as focusing on preventing outbreaks in long-term care facilities because older individuals are more likely to need hospital care if they fall ill.

The state is in a better position today than it was in the early days of the pandemic when it comes to supplies of personal protective equipment, access to testing and contact tracing, Holcomb said.

When asked whether there was anything else Indiana should be doing to curb the spread of the virus, the CDC’s Walke reiterated the three W message (wash hands, watch social distance, wear a mask).

“We all are getting a little tired,” he said. “It’s been a long pandemic and probably will continue into the next few months. … Especially as winter is approaching, we have to be careful not to congregate indoors and reduce the number of people inside as best we can.”

Indiana has no statewide limit on gatherings under the current stage of its Back on Track plan but does require organizers of events with more than 500 people to submit a plan to the local health department.

Some areas that have seen cases soar have lower limits. Earlier this week Evansville said all gatherings larger than 125 people needed to submit a plan to the Vanderburgh County Health Department. St Joseph County officials earlier this month recommended that people not gather in groups of more than 10.

Elsewhere, some of the six other states included in the CDC’s call have placed restrictions on the size of gatherings.

Michigan has limited capacity at restaurants, gyms, and stores and limits indoor social gatherings to 10 people in both home and non-residential gatherings and 100 people outdoors. Illinois earlier this week said that in certain areas of the state bars and restaurants could not offer indoor service and that social gatherings had to be limited to 25 people.

Some other states have moved backward in their reopening plans. At the beginning of this month, Wisconsin’s governor ordered that restaurants and bars in that state would only be open at 25% capacity after coronavirus cases there soared. Bars there sued to have the order overturned, but a judge reinstated it.