Apple is continuing to explore ways to improve the Apple Watch via bands, including adding an extra battery to the strap, as well as a fabric band capable of handling various fitness tracking capabilities.

The Apple Watch is already a very capable wearable device, with it housing a collection of accelerometers and other sensors to enable it to monitor the health of the user, among other tasks. Packing all of these features into a confined space is a design challenge, as at some point it will be extremely difficult to add more components without increasing the size of the casing somehow.

Apple believes it can get around that limitation, by placing some of the components outside of the main Apple Watch unit itself and taking advantage of the free space offered by watch bands and straps. These elements are not currently electrically connected to the Apple Watch, and for the moment serve only to affix the device to the user’s wrist, but Apple envisions giving them extra capabilities.

According to a pair of patents granted by the US Patent and Trademark Office on Tuesday, Apple’s intentions cover expanding the battery life of the Apple Watch, as well as adding more sensors.

The first of the two patents, simply titled “Battery watch band,” is pretty straightforward in terms of what it offers. In effect, it’s a watch band that can house multiple batteries, which is connected to the Apple Watch in some way.

Apple’s suggestion is for the band to include multiple battery cells running parallel to each other, and fitting along the watch band section that goes down the wrist, as viewed by the user. By using multiple batteries that are slightly spaced apart, the band will still be able to flex and move without worrying about physically fatiguing the batteries. 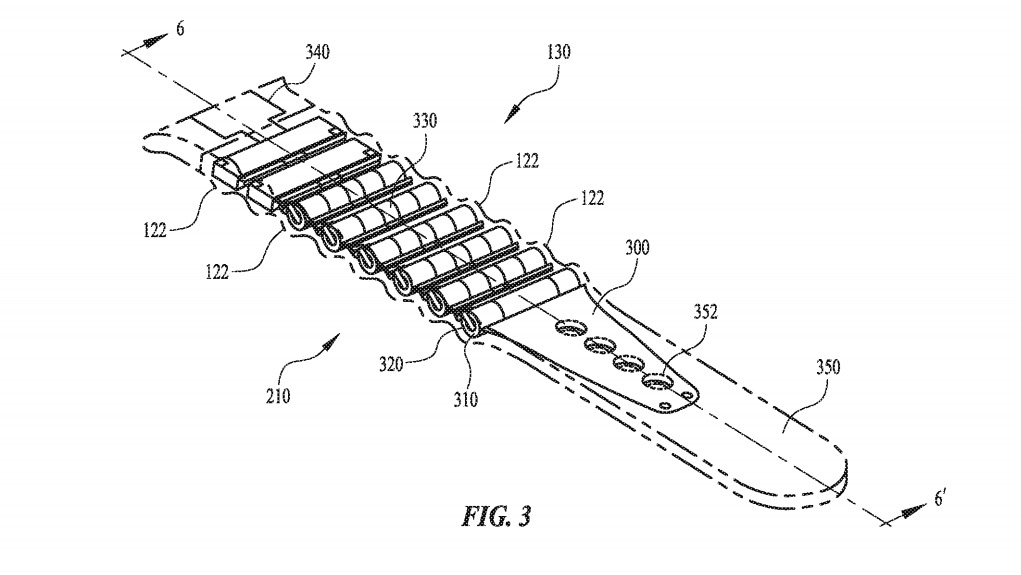 The band could contain multiple batteries to extend the usability time for an Apple Watch.

The band itself would have an inner frame with slots to receive the batteries, complete with tapered projections to protect the battery while slimming down the bulk going towards the sides of the band. An outer cover is employed over the entire assembly. Each of the batteries are also physically isolated from each other, which could potentially allow for simpler replacements during servicing.

The batteries are connected to the Apple Watch by pins within the connector, which slides into the slot at the base of the main unit. Induction coils are mentioned for recharging the batteries, with one battery having the coil wrapped around it and used to recharge all of the cells in the band.

While the main description relates to a typical flexible watch band made from rubber, silicone, or other similar material, Apple also proposes the same thing could be accomplished with a metal watch band. In that particular case, the batteries are held within individual links, encased in an elastomer.

Apple has previously suggested the addition of components within bracelet links, including batteries and other elements, including in a metal band. One filing from 2017 offered that a modular system could have each link using different sensors, and working as a node in a larger ecosystem.

The second patent, for “Fabric-based items with stretchable bands,” explains how a watch band could be made from a stretchable fabric, that would be configured to fit optimally around part of the user. Given it’s an Apple Watch patent, this would generally be considered the wrist, but it does leave the possibility of attachment to other areas of the body.

Made from a “ring-shaped strip of stretchable fabric,” the band could include conductive strands and other circuitry, which can be connected to a variety of sensors and other components. Naturally this can include sensors for measuring the body, such as those for an ECG, blood pressure, respiration rates, temperature, and others. 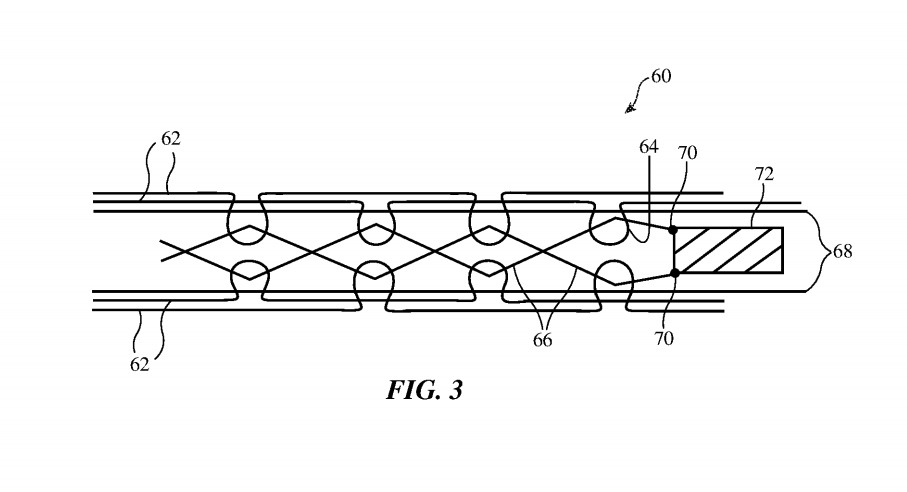 By using a stretchy material, the band benefits from being easily worn by a wide variety of people, possibly in a one-size-fits-all arrangement. Furthermore, it is also able to hold the sensors close to the body, allowing for accurate measurements to take place.

It is suggested the fabric could be able to sustain “relatively high temperatures,” which the patent defines as “those associated with laundering of clothing.” It is suggested this could mean the use of super-capacitors for energy storage instead of batteries.

The use of strengthening strands and conductive strands with meandering paths could be used to allow for the stretching to take place without damaging circuitry.

Wireless charging also makes an appearance, through the forming of a coil from conductive strands in the band. Wireless communications circuitry may also be used, to allow for the band to communicate with the Apple Watch and other hardware.

The idea of a watch band that could expand and contract has been bought up previously, with the October 2019 patent for a “Consistently-tight watch band” suggesting the sue of compliant mechanisms to change the size of the band while in use. This to enable it to retain a specific level of pressure despite changes in the circumference of the user’s wrist through motion.

Using the band for sensors and other elements is a repeated suggestion in patents, with examples including creating a band that could provide information to the wearer in Braille, a band with a built-in charger, and adding buttons.