This story was published in partnership with The 19th, a nonprofit, nonpartisan newsroom reporting on gender, politics and policy.

For months, women across the country have been navigating careers, caregiving and the coronavirus crisis, taking precautions and figuring out a new normal for themselves and their families. During that same time, President Donald Trump was downplaying the seriousness of the illness, flouting guidance from medical experts and urging the reopening of the country as he has returned to the campaign trail and his rallies with unmasked attendees numbering in the thousands.

Then, Trump announced that he is among the more than 7.4 million Americans who have contracted COVID-19. After spending the weekend at Walter Reed National Military Medical Center, Trump returned to the White House, tweeting: “Feeling really good! Don’t be afraid of Covid. Don’t let it dominate your life. We have developed, under the Trump Administration, some really great drugs & knowledge. I feel better than I did 20 years ago!” 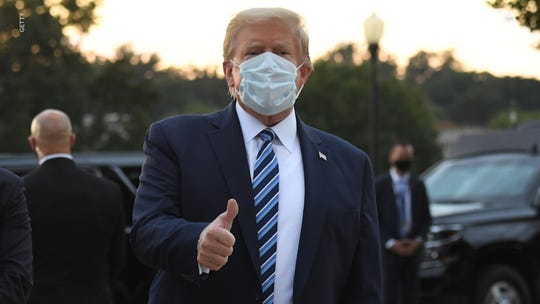 You can buy a $100 coin commemorating President Trump surviving COVID-19 are available for preorder on the White House Gift Shop website. (Photo: Getty)

Interviews with women voters reveal frustration, anger and resentment at what they see as the president’s irresponsibility that has led to a completely avoidable outcome for himself and the nation. They say the president’s actions stand in sharp contrast to the sacrifices they continue to make in their daily lives.

“I was angry at how reckless he had been with not wearing a mask, not social distancing, traveling knowing he had been exposed and endangering his whole family,” said Sara Kerai, a psychotherapist based in Washington. Kerai is a married mother of a second-grader who is learning virtually due to the pandemic.

“I’ve had to turn away clients and income because I have to manage my daughter’s education,” Kerai said. “It’s been a strain. He’s making it worse.”

In an already consequential election year, the pandemic has become increasingly political for women, who make up the majority of the electorate, the U.S. workforce and are being disproportionately impacted by and responding to COVID-19.

The Bureau of Labor Statistics reported that 865,000 women dropped out of the workforce in September, compared to 216,000 men — many unable to juggle jobs and care for children unable to return to the classroom. Research has shown that the already disparate mental health picture for women has grown during the pandemic, especially for working and career mothers. And women are the majority of essential workers in health care, and domestic and service roles.

Among women voters, the gender gap in the presidential election favors Vice President Joe Biden — and in polls, most voters respond that they disapprove of Trump’s handling of the coronavirus. A recent NBC News/WSJ poll found that women prefer Biden to Trump by 27 percentage points.

In the ongoing absence of a national plan to address the pandemic, women are often coming up with protocols for their households. Ashley Troha, a 34-year-old education consultant who is married with two children, ages 3 and 6, said she spent much of the spring researching best practices to prevent the spread of the disease.

“I would say even out of my extended family, we were the most cautious,” Troha said.

Harris says she would absolutely take a vaccine if it was recommended by public health professionals, but not if only President Trump says to.

She cut back on her hours at work to focus on schooling for her six-year-old daughter. Troha said she went through a period of depression because of how hard it was to manage things. Visiting family that was more lax with precautions like wearing masks caused “a bit of family strain.”

When Troha got a notification on her cell phone last week that the president contracted the virus and said that her initial reaction was, “Good.”

“Not that I would want any harm on anyone, but I feel like this entire approach has been so detrimental to so many people in our country and it didn’t seem like he was acting like it was a reality,” she explained. “Part of the delay of our reopening compared to other countries has been the lack of leadership and common-sense decisions … It’s disappointing.”

Rebecca Lyczak said she felt secure returning to working in person this fall as a biology professor at Ursinus College, where she gets tested bi-weekly and students are tested every week. But she’s worried about her husband — a high school teacher currently teaching remotely, but expected to return to the classroom in mid-October — and what his situation will mean for her family.

“Once my husband’s students come back, I don’t think I’m going to be able to see my parents for quite awhile, because I’ll be too nervous,” said Lyczak, whose son is taking a leave from college and living with friends, while her daughter, a high school sophomore, is doing remote learning.

Lyczak said she was surprised the president hadn’t gotten sick sooner, but that she was glad the diagnosis came before he was scheduled to travel to Wisconsin for another rally.

Within hours of Trump’s diagnosis, more White House officials, members of Congress and Trump surrogates and campaign aides also tested positive. Reporting pointed to the likely source of the outbreak as a September 26 event at the White House where the president announced his Supreme Court justice nominee, Amy Coney Barrett. Many in attendance were not wearing masks and greeted each other with hugs and handshakes. Several people in Trump’s inner circle have tested positive for coronavirus since his announcement of his diagnosis.

“If he had taken things seriously, we would maybe not be in this position right now,” Lyczak said. “I’m convinced we would’ve had less people who would’ve died. ”

More than 210,000 Americans have died of COVID-19 since the World Health Organization declared a global pandemic on March 11. The virus has disproportionately killed Black and Latino Americans, who have also borne the brunt of the attendant economic crisis.

In her community in San Rafael, California, Lindsey Riddell said most of her neighbors are wearing masks, but she often feels like much of the country has relaxed the rules and she wonders when things will return to normal.

Riddell, her husband, their three children under the age of 5 and an au pair live in their three-bedroom home. The couple works from home — she in their bedroom and he in a hallway or the garage — and Riddell says that while they are fortunate enough to have in-home child care and the resources to weather the pandemic as comfortably as possible, too many of her friends and colleagues are struggling.

“This stuff is wearing on everyone, and now the president has coronavirus,” Riddell, 42, said. “Maybe that will help more people keep each other safe,” she mused, hoping that the public will heed the president’s fate and not his example.

Watching the president’s actions over the weekend, Kerai said she is also thinking about frontline workers, small businesses that have had to close and those who have lost loved ones to COVID-19.

“This has been so difficult for so many people,” she said, adding that her “mind was blown” when she saw Trump’s impromptu motorcade outside of Walter Reed to wave to supporters on Saturday afternoon, despite still having coronavirus.

“The lack of judgment, the wanton endangerment … it’s infuriating,” she said.

Riddell said she was frustrated to hear about the medical treatment the president is receiving — top-notch care not available to the majority of Americans who get sick.

“It’s easy to downplay the seriousness of a very dangerous disease when you know you have access to the best, most cutting-edge treatments,” she said.

“It’s easy to feel immune and invincible when you are among the privileged few. It seems grossly unfair,” Riddell said “He’s putting his own supporters at risk. I may not agree with all the Trump supporters in the world, but I don’t want harm to come to them.”

« Data Presented at TCT Connect Finds Pre-PCI Use of Impella for AMI Cardiogenic Shock is Associated with Higher Survival, Particularly in Women
US testing 3 drugs to tamp down coronavirus »