CDC says state is heading in the wrong direction

R-0 may be the most important scientific term you’ve never heard of when it comes to stopping the coronavirus pandemic.

About an hour after the Indiana State Department of Health announced yet another record high of new coronavirus cases Thursday, the Centers for Disease Control and Prevention said the Midwest numbers suggest the region is going in the wrong direction.

In a press call discussing the situation in six states, including Indiana, Dr. Henry Walke, incident manager for the CDC’s COVID-19 response team, said his colleagues were working with local and state health officials to mitigate spread of the virus.

The CDC region that includes Indiana, Illinois, Ohio, Wisconsin, Michigan and Minnesota has seen a 27% increase in cases and 37% increase in deaths in the past seven days, Walke said.

The statistics suggest “we may be going backwards in our efforts” to contain the virus, Walke said. He echoed the message that state health officials have sent repeatedly to wear a mask, social distance, and wash your hands often.

Over recent weeks, Indiana’s numbers indeed have gone in the wrong direction. Indiana on Thursday reported 2,880 additional cases, bringing its seven-day moving average of cases above 2,000 for the first time. The seven-day average for deaths has been in the low 20s, a level last reached at the end of May.

The state has increased testing by about 4,000 daily tests over the past month to about 25,000 a day, but a greater share are coming back positive. As of last Thursday, the moving average for the positivity rate for all tests was 6.9%. A month earlier it was 4%.

Fishers firefighter Paul Ashbt conducts a coronavirus test at the City Services Building over the summer. Indiana is seeing both its deaths and positive cases increase. (Photo: Grace Hollars/IndyStar)

Hospitalizations also have risen to a level not seen since early May, when the state was still in the most restricted phase of its Back on Track plan. On Thursday Indiana reported 1,515 people hospitalized across the state for COVID-19.

Gov. Eric Holcomb, who moved the state into the final phase of its reopening plan last month, has resisted calls from his Democratic opponent and others to restore some of the measures of the previous months that aimed to stem viral spread.

“Where we need to make improvements is on the front of what we can control,” he said. Holcomb said Wednesday during his weekly coronavirus news briefing. “We’re not living in a police state. … The last thing we need to do and the last thing I want to do or need to do is go back to a stay at home.”

Instead, Holcomb has said that the state’s homeland security department is helping local officials in hard-hit areas with

Step in the Right Direction for DCB in Below-Knee CLI

The investigators, however, took a page from coronary studies, also assessing late lumen loss along the entirety of the lesion, rather than just at the single narrowest segment in the lesion, as is classically done.

“The subsegmental measurements are more rigorous,” lead investigator Antonio Micari, MD, University of Messina, Italy, said at the virtual meeting of Transcatheter Cardiovascular Therapeutics (TCT) 2020. “This can provide more detail on how the lesion fails over time.”

There is a relative paucity of DCB technology for BTK lesions, with three earlier DCB trials failing to meet their primary end point. Medtronic also withdrew its earlier-generation paclitaxel-coated IN.PACT Amphirion DCB from the global market in 2013 based on results from the IN.PACT DEEP trial showing a lack of treatment effect and trend toward more major amputations at 12 months.

The present results showed no safety concerns among the 50 participants, including no major amputations in either group and a low all-cause death rate of 4.3% for DCB and 8.0% for PTA (P = 1.0), Micari said.

“That was a very interesting presentation with very promising results, but I’m not convinced,” session comoderator and limb salvage pioneer Frank J. Veith, MD, said. “Are you planning to add more patients, and what about longer follow-up?

“I would be more convinced if you had 2-year follow-up and at least double or triple the number of patients in each arm,” added Veith, professor of surgery at NYU Langone Health, New York City, and at Cleveland Clinic Lerner College of Medicine of Case Western Reserve University.

Micari said they are planning longer follow-up, possibly out to 5 years. “This is a feasibility study and we are happy to show that, even in a small population, we have a difference. This is a new design of the study that we can apply to a larger trial and we are definitely looking for a bigger trial.”

During a press briefing, discussant Peter A. Schneider, MD, University of California, San Francisco, said IN.PACT BTK is notable for several reasons: every person had a CTO and the mean lesion length was over 20 centimeters (DCB 21.5 cm vs PTA 21.8 cm). “So this is

Posted in health | Comments Off on Step in the Right Direction for DCB in Below-Knee CLI
Tags: BelowKnee, CLI, DCB, Direction, Step

Limbaugh, 69, said recent scans show “some progression of cancer.” It’s “not dramatic, but it is the wrong direction,” he told listeners Monday, according to a transcript posted on his website.

The host said Monday that he has been diagnosed with stage 4 lung cancer.

On Feb. 3, he first disclosed that he was sick. The following day, President Donald Trump awarded Limbaugh the Presidential Medal of Freedom, the nation’s highest civilian honor, during the State of the Union address.

Limbaugh said that he had been reluctant to speak too much about his illness on-air, in part because “I’m not the only one that’s going through hardships, challenging times.”

“I want to stress here that I know countless numbers of you are experiencing the same thing. If it isn’t lung cancer, it’s some kind of cancer. If it isn’t you, it’s somebody really close to you. If it isn’t an illness, it’s something,” he said Monday.

Limbaugh said that prior to the recent scans that showed some progression, “the scans had shown that we had rendered the cancer dormant.”

“So we have to tweak the treatment plan, which we did, and the chemotherapy drugs in hopes of keeping additional progression at bay for as long as possible,” Limbaugh said. “The idea now is to keep it where it is or maybe have it reduce again. We’ve shown that that is possible.”

This story originally appeared on NBCNews.com.

As coronavirus surges, only 2 states are trending in the right direction

There is nearly no place in America where Covid-19 case counts are trending in the right direction as the country heads into what health experts say will be the most challenging months of the pandemic so far.

© Paul Hennessy/NURPHO/Associated Press
Health care workers perform COVID-19 testing at a drive-through site at Eastern Florida State College on October 9, 2020 in Palm Bay, Florida. The Florida Department of Health reports that COVID-19 cases, deaths, and hospitalizations are on the rise while U.S President Donald Trump plans to hold a rally in Sanford, Florida after contracting the disease. (Photo by Paul Hennessy/NurPhoto via AP)


The US is averaging more than 55,000 new cases a day — up more than 60% since a mid-September dip — and experts say the country is in the midst of the dreaded fall surge. On Friday, the US reported the most infections in the single day since July. And as of Saturday, more than 8.1 million cases of the virus have been reported in the US and 219,286 people have died, according to data from Johns Hopkins University.

Only Missouri and Vermont recorde a more than 10% improvement in the average number of reported cases over the past week, according to data from Johns Hopkins University. Meanwhile, cases in Connecticut and Florida increased by 50% or more and those in 27 other states rose between 10% and 50%.

“This really is a harrowing time, and people have to be careful,” epidemiologist Dr. Abdul El-Sayed told CNN on Saturday.

‘This surge has the potential to be way worse’

More hospitalizations will likely be followed by a rise in daily coronavirus deaths, says Dr. Francis Collins, director of the National Institutes of Health.

And though the average of 700 coronavirus deaths a day the US is still below the daily tolls of 1,000 from July and August, University of Washington researchers project more than 2,300 Americans could die daily by mid-January.

“When we saw this kind of transmission earlier in the pandemic, in March and April, the virus hadn’t seeded everywhere … This surge has the potential to be way worse than it was than either the spring or the summer,” El-Sayed, Detroit’s former health director, said.

Experts say Americans can help get the virus under control by heeding guidelines touted by officials for months: avoiding crowded settings, keeping a

Posted in health | Comments Off on As coronavirus surges, only 2 states are trending in the right direction
Tags: coronavirus, Direction, states, surges, trending

U.S. ‘Headed in the Wrong Direction’ as a 3rd Peak Nears

Here’s what you need to know:

As coronavirus cases across the United States climb toward a third peak, the country surpassed a total of eight million total known cases on Thursday afternoon, according to a New York Times database.

Epidemiologists warned of a new, worrisome phase as 17 states are seeing surges unlike anything they experienced earlier in the pandemic. States including Alaska, Minnesota, Montana and Wisconsin reported more new cases during the seven-day stretch that ended on Wednesday than in any other week since the virus arrived in the country.

Reports of new cases are trending upward in 41 states over the last two weeks, while nine states are holding case numbers roughly steady. No state in the country is seeing a sustained decline.

Many of the 17 states seeing more new cases than ever — located mostly in the Midwest or in the Mountain West — had relatively few cases until recently. But cases are now steadily climbing. Intensive care unit beds in hospitals are few and far between in some rural communities, experts said, raising concerns about crowded facilities.

“What’s happening in the Upper Midwest is just a harbinger of things to come in the rest of the country,” said Michael Osterholm, an infectious-diseases expert at the University of Minnesota.

New cases per day in the United States

New cases per day in the United States

New cases per day in the U.S. 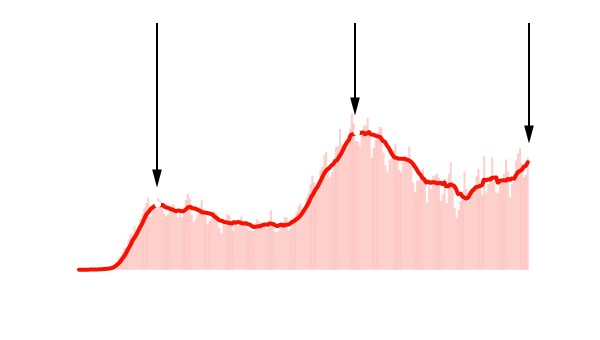 in the United States

Already, signs of the uptick are appearing beyond the nation’s middle. In the Northeast, where cases have been relatively low since a spring surge, reports of new infections have started ticking upward again. In the South, where infections spiked this summer, the picture varies from state to state, with sustained progress in Florida and Georgia but worrisome trends in Arkansas and Kentucky.

The number of cases alone is not a full measure of the nation’s outbreak — it is difficult to compare the current numbers with earlier points in the U.S. outbreak when testing was less widespread — and deaths from the virus have been relatively flat in recent weeks, with an average of about 700 per day. But “we are headed in the wrong direction,” said Caitlin Rivers, an epidemiologist at Johns Hopkins University.

“That’s reflected not only in the number of new cases but also in test positivity and the number of hospitalizations,” said Dr. Rivers, an epidemiologist at Johns Hopkins University. “Together, I think these three indicators give a very clear picture that we are seeing increased transmission in communities across the country.”

High levels of infection in colleges and universities, Dr. Osterholm said, are serving as one source of the spread. Transmission also has